Before a guided goose hunt, we make many preparations. We scout, we repair decoys, we clean guns and once we find the birds, we call clients and tell them where we need them, what time they need to be there, and what they will need to bring. A question I often get is what gun is ideal for shooting some giant Minnesota honkers.
The old ideology is the bigger the better. Till a few years ago my father (who introduced me to this way of life) would bring his 12 gauge for ducks and a 10 gauge for geese. With the introduction of the 3 1/2 inch 12 gauge shot, the playing field between a 10 and 12 gauge has been leveled. As far as shot energy down range goes there is no difference between 10 and 12 gauge loads. The only difference is the amount of pellets or BBs. A 10 gauge will offer more pellets on target down range than a 12 gauge will, but with the same effective range. It all comes down to shot placement, regardless of range.
Pick a shotgun that will fit you.
My advice to all my friends before they buy a new shotgun is, go to a gun range or gun show, shoot them all, pick the one you like the most.
When I was 15 I started shooting a Benelli Super Black Eagle. It was the best gun on the market at the time. I put literally thousands of rounds through that gun. When it came time for a new gun, I called my brother-in-law Andrew Arnold at Reeds Sports in Walker and Onamia Minnesota. Andrew sent me three guns to test. Andrew knew that I would put them through their paces and I would be able to give him a reliable  recommendation on which gun the average consumer should buy. I failed him.
Modern Autoloaders
Looking at advertising, every gun will claim they produce the “fastest auto loading shotgun” in the world. Andrew sent me three guns, the Benelli Super Vinci, the Browning Maxus and the Winchester Super X 3.  They’re all great shotguns.
Gun Testing
That first day I thought, “while I have this opportunity I am going to beat the living $hit out of these guns.” And I did. We hunted the Mississippi River north of Rogers MN in December. The first thing I did with these weapons (sorry Andrew, I may have forgotten to tell you this) was place them in the river for 15 minutes before pulling them out and letting them freeze. We shot 19 geese that day and no matter what I did, I couldn’t get any of those shotguns to malfunction. They passed the freeze test.
For most modern waterfowlers, we need our shotguns for more that just shooting ducks and geese. You need that shotgun to fit you. You need that shotgun to be reliable, and someday, you may need to use that shotgun as a paddle.
With all the great shotguns on the market it doesn’t matter which one is faster, which one looks cooler or what your friends shoot. Shoot the shotgun you like the most. My father is a loyal Browning A5 shooter. I shot a Benelli Super Black Eagle when I was 15 because my father bought it for himself and hated it. He shot it for one day and decided to go back to his 2 3/4 inch A5. This year he picked up the new 3 1/2 inch A5 and it was like reuniting with an old friend. I don’t know if loyalty or familiarity was behind me choosing the Benelli Super Vinci when it came time to retire my SBE, but whatever it was, that was the gun I liked and its the gun I bought.
Shoot a lot of guns. Try everything, keep an open mind. Shoot everything available to you then pick the gun you (not your friends, or your father) like the best and practice with it. Practice out of a layout blind, practice out of standing corn or out of your favorite duck blind. We owe it to the birds we love to take well placed shots.
When you take buying a new gun seriously and put in your time and due diligence, you will be a more confident shooter and that will equate to more birds falling in your decoy spread this year.  Good luck, shoot straight. 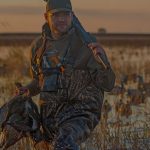 How to store your goose and duck decoys

MaXXed Out Guides
4.4
Based on 75 reviews

Sean Foy
21:59 21 Mar 22
Our group hunted with Maxxed Out in Kansas and South Dakota this year. Had a great time in both states. Great housing accommodations. We’d hunt with these guides anytime. Already have dates booked for next year.

Dylan Hoflock
18:26 21 Nov 21
Had a great time with maxed out guides! Great people that put us on more birds then I’ve ever seen before!!

George Lagonia
22:27 14 Nov 21
My group has hunted all over the USA and Canada for Waterfowl. My hats off to Graham and his crew. He runs a great show. Their gear is great, their efforts are greater. We are all about our retrievers, Graham made sure that was a priority. No other guide service has ever made sure the set up for our dogs was so important. Super grateful for that guys!!! We had a couple of magical days in S. Dakota with Maxxed Out Guides and will definitely be returning!!

Robert Lucas
19:55 15 Sep 21
We had a great experience with Maxxed out! They are the best at what they do! As professional as it gets from arrival to clean up! Highly, Highly recommend these guys!
‹
›
BACKED BY THE BEST

To do what we do for 8 months out of the year it truly requires the best equipment in the waterfowling industry. These companies put the products in our hands that allow us to be successful day in and day out.
Call - 651.335.0780